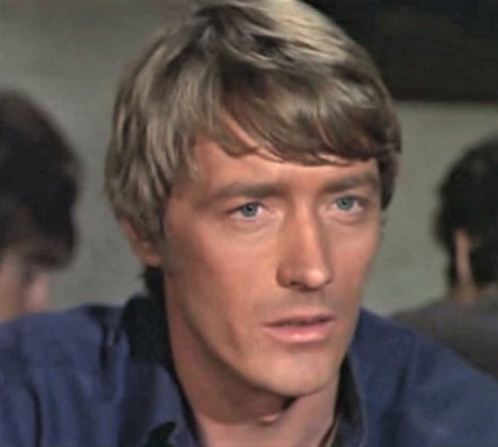 With many thanks to Raian, my always positive and helpful beta!

The little girl with long braids smoothed her blue skirt, raised her head with an air of defiance and answered, “So what?”

The young boy who faced her twisted the bottom of his vest, red with confusion and wondering how he could have angered his friend.

The two children had left in the early afternoon, fishing poles in hand, towards the river which undulated gently in the meadow. Its waters shimmered under an already warm sun for the season and one could hear the delicate splash of silver fish.

Julie was then an appetizing little girl with always colorful cheeks and cookie-colored skin, golden in all seasons. Her immense and almost black eyes, too often impertinent for the taste of the young boy, seemed to devour everything. They glowed with an intense fire called Curiosity. Her very long hair had the exact color and shine of the chestnuts they collected only a few years ago.

The little girl had accidentally stained her beautiful dress. The bottom of it had caught on the brambles.

He stepped forward to free the fabric but Julie had pulled it much earlier, impetuously. Then the mud had taken possession of the pretty velvet, rising towards the waist as if by magic.

Scott feared the fury of her parents. “Julie, stop, you’re all dirty!”

Rich, powerful and authoritarian, Julie’s father was a man used to being in charge and nobody would have dared to stand up to him except his daughter who he spoiled without shame.

Scott’s grandfather belonged to the same milieu. Just as rich and even more influential, he raised his grandson as he had raised his daughter: with love but great firmness.

The two children had developed a strong friendship because their families liked to see each other.

Scott, only one year older, had naturally developed a very protective attitude towards Julie. If she was a terrible and capricious child, very conscious of her powers over others young or old, Scott was gentle and dreamy, accommodating rather than opposing. He was much more thoughtful and skillful, often obtaining by negotiation or cunning what his grandfather would otherwise have refused to grant.

Scott, tall and very slender for his age , possessed an alabaster-white skin strewn with a few freckles.

His hair, thick and silky, had the soft and shiny colour of ripe wheat. He observed the world around him, big blue-gray eyes quiet, serious and thoughtful.

The two children were as different as fire and water, the sun and the moon, the burning sand of the deserts and the pure, frozen snow of the mountains. But even though everything opposed them, they were very attached to each other, pushed very awkwardly it must be said, by their two families.

Julie has become beautiful, really beautiful. And her temperament has softened. She now looks like a round peach, soft and velvety, full and sweet . A peach that Scott dreams to pick and into which he dreams to bite one day.

As for him, he is a tall and handsome young man with delicate but virile features. Slender but strong, broad shouldered, he is very attractive and remains a sweet and dreamy person. Gifted with a great sensitivity and intelligence, he has perfected his education through solid studies and the practice of several sports. He is above all a skilled rider.

They both have recently pledged to each other and got engaged.

In the cozy parlour of velvety pink and green hues, under the beautiful crystal chandelier which radiates a soft light, Scott and Julie are seated side by side on a small brown silky couch. She is looking fixedly at the lovely bunch of red roses. He is following with empty eyes the complicated patterns decorating the fringed carpet. She is red with raw emotion and confusion and her breath is jerky and rapid. He is livid and frozen, his throat burning and tied.

“Why must you leave, Scott? ” “It is necessary,” answers the young man, very moved too. He sees the worry and sorrow in Julie’s eyes and it hurts him.“ After everything you’ve told me, you too imagine that you have to go to war to be a man!” “Julie, it’s not that and you know it! ” “So, what is it, Scott? What is it ?”

The girl’s eyes, enlarged by her failure to understand and her fear, devour him. Her lips tremble as she tries not to cry.

Distraught by what he is doing, the young man does not know what to say. Besides, what could he actually say that is acceptable? Does he himself know exactly what drives him to this fratricidal war?

Scott kneels down in front of Julie and takes her hands – so thin in his own hands which are so strong and so large. Hands that he would use to caress, but that will kill tomorrow. He knows it. She knows it.

“Julie… Are you ashamed of me?” The young man’s eyes are pleading and betray a terrible anguish.”Ashamed? ” She turns her head away and sighs. “Maybe finally… Scott, you… We’re so young… “

Julie shakes her head. “I don’t understand, explain it to me. I want to know… Scott if we should get married, then you owe me this.”

Scott sits down again next to the girl and lets out a barely perceptible breath. He stares at her long and unhurried. His soft and penetrating eyes envelop her and want to protect her. They talk to her about tender things, in spite of himself. “I hate slavery as much as you do. If you were a man, would you just stand there and do nothing? Tell me, Julie…”

The girl is writhing in her seat. She doesn’t like the way the conversation is going. A crooked path, she thinks. She is boiling inside because she just wants to shout that she loves him and that alone counts : that alone should count for him too. But she holds herself back and waits for the rest.

“Julie… I need to go and accomplish something on my own.” He wants to say, ” Julie, I love you, but right now, you are not enough for my life. I’m sorry, so very sorry.”

Trying to find words that he’d like to be fair and soothing at the same time, Scott suddenly and despite himself, gets to the point.

“I can’t stand working for my grandfather anymore. I’m suffocating here ! I need to cut away from all this, get a new life, move, do something exciting. I feel so useless…”

Julie is frightened by the violence of his words. They do not take her into account anymore, neither her own desires, nor their future or feelings. She looks down and cries very softly.

Scott gets up and draws her to him, holds her tightly to his chest and caresses her hair tenderly. She feels his breath on her face, hears his heartbeat. And she is in pain. What is going to happen to him?

War is dangerous. Soldiers got wounded sometimes. Sometimes they even die .

“I have to leave or else I can’t be happy. I didn’t choose to complicate things. I don’t know why this need drives me. I’m so sorry Julie, so sorry and so sad…”

“I know.” Scott’s way is still very long. The war won’t be enough. There’s that father who abandoned him. This raw wound that he wants to make look healed but that burns at him over and over again.

She’d like to talk to him about it again, but is it worth it? Scott is not ready: those discussions upset him and make him too angry. They just unsettle him. Perhaps he will find in fighting for a noble and beautiful cause an outlet for this rage that has always and increasingly inhabited him?

Their story is over and she knows it. She knew it before he did, and now she must help him let go all the way .

PLEASE LEAVE A COMMENT
Thank you for reading! The authors listed on this site spend many hours writing stories for your enjoyment, and their only reward is the feedback you leave. So please take a moment to leave a comment.  Even the simplest ‘I liked this!” can make all the difference to an author and encourage them to keep writing and posting their stories here.  You can comment in the ‘reply’ box below or Email Véronique directly.

2 thoughts on “The Choice of A Life by Véronique”